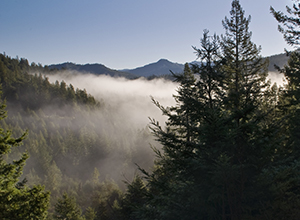 Finally, some good news about the effects of climate change. It may have triggered a growth spurt in two of California’s iconic tree species: coast redwoods and giant sequoias.

Since the 1970s, some coast redwoods have grown at the fastest rate ever, according to scientists who studied corings from trees more than 1,000 years old.

“That’s a wonderful, happy surprise for us,” said Emily Burns, science director at the Save the Redwoods League, which is collaborating on a long-term study with university researchers on the effect of climate change on redwoods, the world’s tallest trees, and giant sequoias, the largest living things by total mass.

“The forests are not experiencing detrimental impacts of climate change,” Burns said.

Researchers doing fieldwork for the study also made a bonus discovery. They came across an ancient, shaggy tree that corings revealed to be the oldest coast redwood on record. At 2,520 years of age, the ancient tree beats the previous record-holder by 300 years.

Humboldt State forestry professor Stephen Sillett, one of the researchers, said a variety of factors besides climate change could explain the increased growth rates.

“We really do not know,” Sillett said. “What we can say is that … it’s not like a doom and gloom scenario by any means.”

Conducted by scientists from UC Berkeley, Humboldt State and the Marine Conservation Institute, the research program was launched in 2009.

Scientists established 16 research plots in old-growth redwood and sequoia stands throughout their range — the west slopes of the southern Sierra Nevada for giant sequoias and a narrow coastal strip extending from Big Sur to southwestern Oregon for redwoods.

By taking pencil-thin corings from 78 redwoods and studying tree rings, they have compiled a chronology going back to the year 328. They have also analyzed tree rings from giant sequoias dating to 474.

Together, the information provides a profile of historic growth rates and weather, revealing that redwood trunk growth in recent decades has shattered records. The trunks are adding girth — annual wood production in one tree alone was the equivalent of several million pencils — and storing large amounts of carbon dioxide.

Though global warming is generally expected to make wet areas wetter and arid regions drier, its affects on regional precipitation are less clear. Tree records from the study indicate that precipitation has been highly variable but has not declined overall in the study area in recent decades.

Sillett said old giant sequoias could be growing faster because rising temperatures have lengthened the growing season in the Sierra Nevada.

The redwoods could be getting more sun as a result of reduced fog related to climate change, Burns said, while still getting the precipitation they need.

But Sillett, who has done pioneering research on the complex biological community in the high redwood canopy, said it may be that a reduction in North Coast air pollution from wood processing plants has increased light in redwood stands, aiding growth.

Another possibility, he added, is that by reducing wildfire damage, a century of fire suppression in forests has enabled redwoods to devote more energy to trunk growth.

The study, funded by foundations, corporate donors and the Save the Redwoods League, is expected to continue for at least a decade longer. Scientists are presenting their initial findings Wednesday at a symposium in Berkeley.

Both ancient tree species have survived climatic shifts in the past, and redwoods were more common during the warmer Miocene Epoch than they are today, Sillett noted.

When it comes to climate change, he added, “I’m more worried about humans than I am about redwoods. I think they’re going to hold their own.”